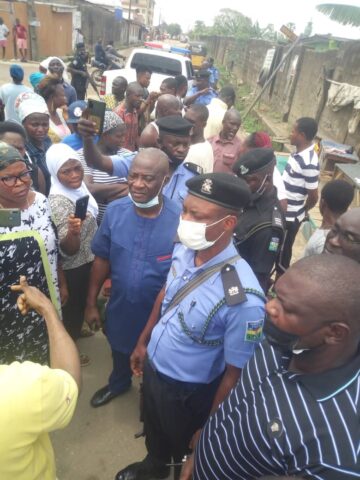 The residents of Akinbaiye Community and its environs, on Wednesday, stormed the Undertaking Office of Ikeja Electricity Distribution Company (IKEDC) in the community to protest over outrageous bills which they claimed to be extortion of the customers.

Expressing their frustration over the high bills, the concerned residents of Moshalashi, Akinbaiye, Agedegudu, Amodu Famobi, Aregbe and others complained that the bills given to them do not commensurate with the service they get from the company.

According to them, the communities always experience epileptic power supply which affect their socioeconomic lives.

One of the protesters, Mukaila Akingbehin, explained that the residents in the community were surprised to have received outrageous bills for last month despite the fact that the community experienced blackout almost throughout the month.

“They’re really cheating us and they are still giving us outrageous bills. Last month we were billed for the service they didn’t render. We don’t know what’s the cause. Those around us are using the light except us. What we are telling them now is that they should disconnect us since they are not ready to give us light and that they should stop billing us.”

However, during a peace talk between both parties organised by the Divisional Police Officer (DPO) of Aswani Divisional Police Station, SP Adeleke Ojajuni, IKEDC officials promised to resolve the issues and ameliorate the inconveniences of the residents, ECHONEWS gathered.

It was gathered that the community, though under IKEDC, gets supply from Eko Electricity Distribution Company (EKEDC) but IKEDC has promised to map out a plan on how to be directly responsible to the community in order to solve the epileptic power supply the community experiences.

Akindehin said: “During the meeting, they promised to resolve the issue and if the situation persists beyond the time we were given, we will know the next line of action.”

Efforts to get an IKEDC official to comment on the situation proved abortive.