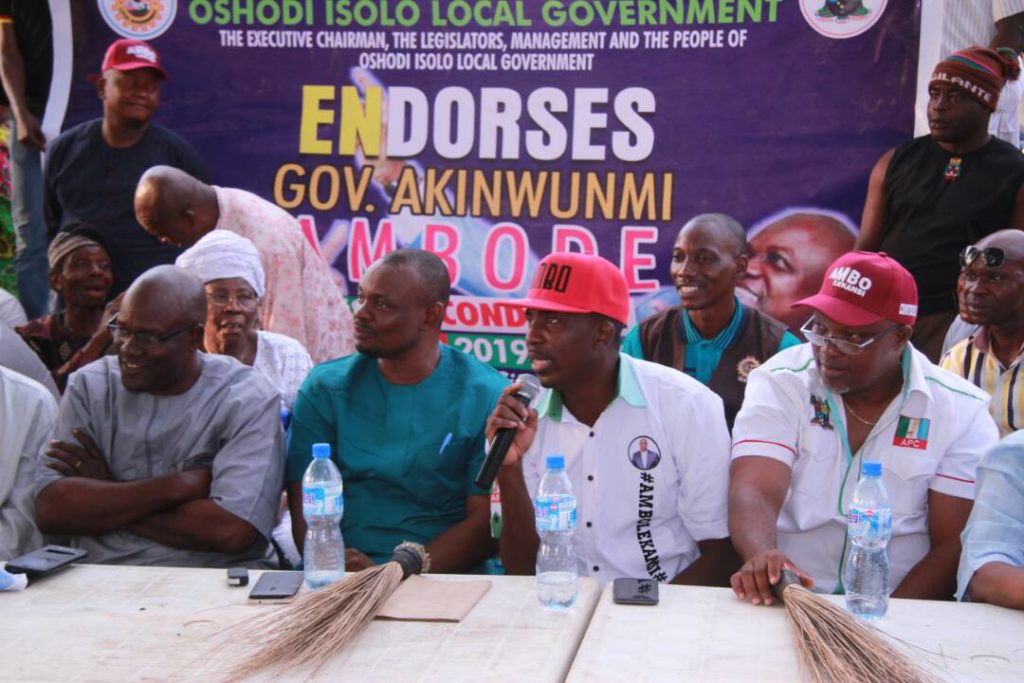 The members of All Progressive congress (APC) in Oshodi, Isolo and Ejigbo have joined others in various local council development areas across Lagos State to sing solidarity support and for the second term bid of Governor Akinwunmi Ambode.

They said the giant strides of the governor in Lagos particularly his visible transformation work in Oshodi, Isolo and Ejigbo deserved continuity.
For instance, an event was held at Owoseni Primary School, Oshodi, where religious leaders, community leaders, artisans, representative of dominating tribes in Oshodi, party leaders and members of APC trooped out to endorse the candidature of governor Ambode for his second term bid.

The symmetry drawn from the speeches of each representative of all shade of interest hinged on the unprecedented giant strides of Ambode across the nooks and crannies of Lagos which they described as being audible and visible. 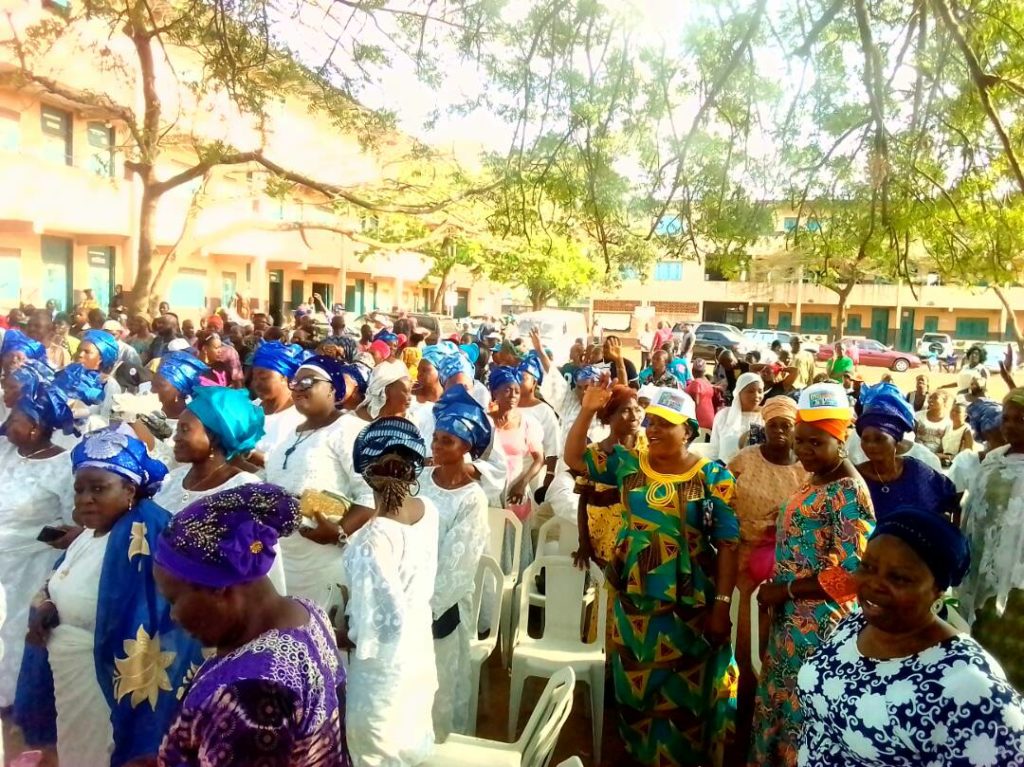 They believed that his second coming would be for the consolidation to make the state become smart city.

The Executive Chairman of Oshodi-Isolo Local Government, Hon. Idris Bolaji Muse-Ariyoh, who addressed the mammoth crowd at the occasion, pointed out that only ingrates and anti-development person would say Ambode does not deserve second term.

He referred to the rebranding of Oshodi through infrastructural development. He therefore urged people to start mobilizing for the re-election of governor Ambode which, according to him, is the only panacea for continuity of good governance in Lagos.

The representative of Oshodi-Isolo constituency 1 at the Lagos State House of Assembly, Hon.Hakeem Olushola Shokunle emphasized that no part of Lagos without the presence of Ambode in term of Infrastructural development. “Our governor deserves another term and we would use all lawful means to compel him to listen to our demands.”

The communiqué of the party was handed over to Hon.Shokunle for onward delivery to the state governor, Akinwunmi Ambode.

At a re-affirmation and endorsement ceremony held at CLOU Event Centre Isolo recently, the Executive Chairman, Isolo LCDA, Hon. Shamsudeen Abiodun Olaleye, and other stakeholders in the community spoke with one voice to reconfirm the endorsement of Gov. Ambode as the sole candidate of the All Progressives Congress (APC) in Isolo for the forthcoming gubernatorial election. 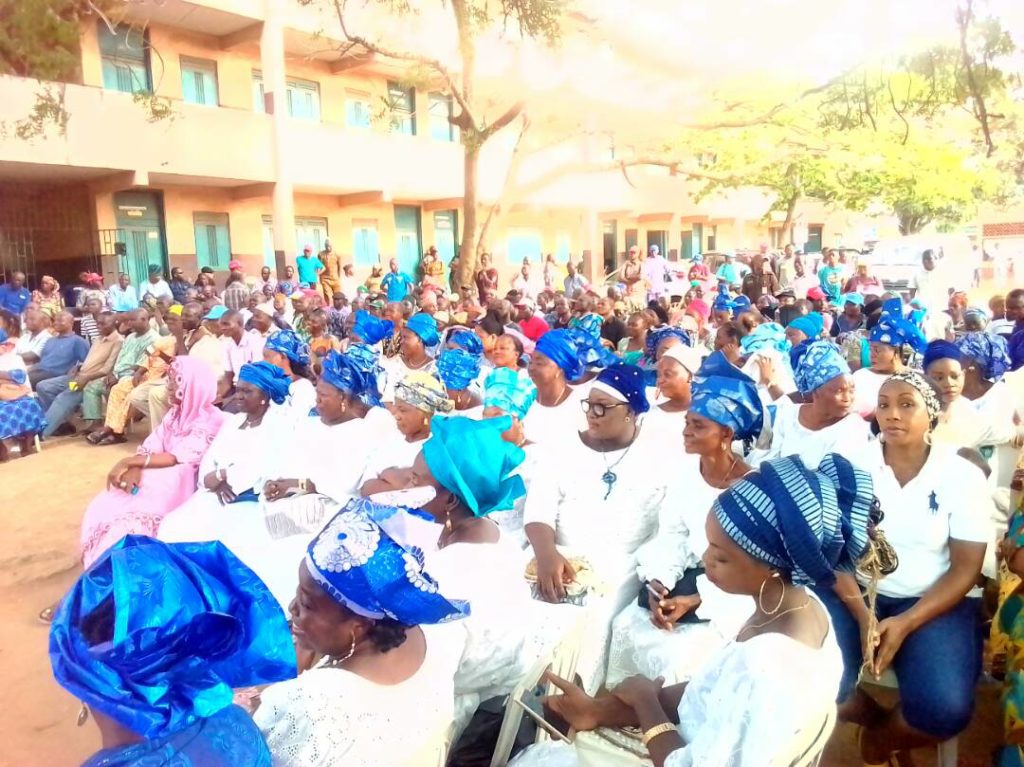 The re-affirmation ceremony which attracted APC leaders, women, youth and selected group of artisans from the seven political wards of the council areas, came barely a week after the Lagos West Senatorial District had unanimously declared its support for Gov. Ambode for a second term in office at a rally held at the Blue Roof inside LTV Complex, Alausa, Ikeja.

According to the council boss, Gov. Ambode’s track record since his assumption of office has made it expedient for the people of goodwill in Isolo LCDA to endorse him for a second term in office.

“Since our amiable governor mounted the saddle, he has provided good governance and excellent leadership in Lagos State through the execution of projects and programmes that have impacted positively in the lives of Lagosians.

“No doubt Lagosians love their governor and Gov. Ambode is after Lagosians height and here in Isolo we are proud to be in the forefront of his second term bid because he has been good to us.
“He commissioned Ago Palace Way and two more roads are currently under construction in Ilasamaja and Okota areas; the re-construction of Murtala Muhammed International Road is expected to impact positively on the socio-economic wellbeing of Isolo LCDA. We are pleased to endorse second term in office because we are convinced he would do more for our LCDA in his second term,” he declared.

Also speaking at the event, APC Chairman Isolo LCDA, Alhaji W.A. Raji said Gov. Ambode remains the obvious choice of all and sundry in Isolo because has surpassed his predecessors in all ramifications in just three years in office. “I have no apology for that and I stand to be corrected.

“At Isolo LCDA, we are pleased to endorse him for a second term in office. In fact, we are ready to offer him a third term ticket if the constitution permits,” the party chieftain stressed.
Similar endorsement program was also held in Ejigbo where people indicated their solidarity support for the second term bid of Ambode to continue as the Lagos State Governor in 2019.