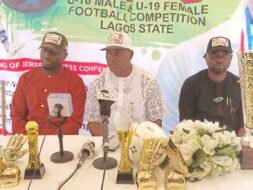 The 6th Aare Tomori Williams annual football tournament is scheduled to start very soon as plans have been structured down to have a very ease tournament.

Speaking to the Press at the official draws and press conference of the tournament, Philanthropist and business man, Aare Tomori Williams said the motive for sponsoring the tournament is to discourage youths from taking go drugs and other social vices in the society.

The businessman also urged the players and coaches to abstain from bad characters and imbibe the character of an ‘omoluabi’.

“The reason why I sponsored and gave my full support to the annual Aare Tomori Williams Cup is to engage the youths productively and use sport as a tool to discourage them from engaging in social vices.

“While growing up in Ebute-Metta, I discovered that a lot of youths take take drugs and along the line, I was approached a young man named Prince Lateef Ogunfowora, who introduced the idea of sponsoring football competitions for the youths and I’ve been impressed with the success of the tournament so far.

“I also want to use this medium to appeal to this young players to remain focused in their career and shun drug abuse because it ruins career.”