Ariwo Oja! This is the code for the operation that has swept the market women and men of Lagos off their feet since we launched it two weeks ago. Challenged by the need to create grassroots communications strategy that would bring the laudable achievements of Lagos State Governor Akinwunmi Ambode into the conversation among the buyers and sellers in the market, I thought of the concept of Ariwo Oja, literally meaning “market noise” but better metaphorically understood as the conversation in the market as platform for the engagement.
The truth is that the market is the centre of the community. Daily, buyers and sellers congregate for exchange. But in reality, they do much more. They share gossip, their own brand of newsbreaks!. “Noise” like this has had adverse consequences. The market women of Abeokuta used this conversation to discipline the Alake, the Aba Women employed to protest taxation by colonialist. Wise government keep their ears open for the gist of the market because they are the barometer of public temper. 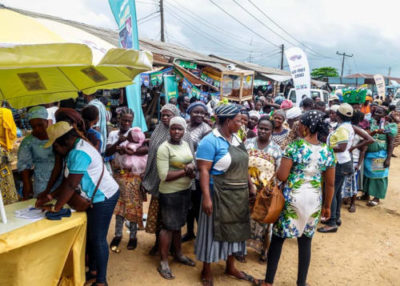 In his inaugural address as the governor, Mr. Akinwumi Ambode emphasised the need for innovative ideas to engage problems. I was happy and excited when he approved the execution.
The Lagos State Market Branding Project, described streetwisely as “Ambode Goes to the Market” uses entertainment to attract, below the line gifts to establlish interest and activate the participation of market women in the conversation around the achievements of Gov. Ambode. As the fun-filled event proceeds, the officials go to meet the women in the stalls to administer questionnaire on their perception of the administration and their needs.
The Office of Communities & Communications domiciled in the Ministry of Local Government & Community Affairs found a resourceful marketing communications company, DD-IMC led by Mr. Tosin Bakare, to execute the experiment. The results exceeded our expectations.
For this pilot, we chose the largest market in each of the five divisions of Lagos State- Badagry, (Alaba International) Lagos Island, (Sura), Ikorodu ( Sabo) Epe ( Aiyetoro) and Ikeja (Oke-Odo). We have been in four markets. The last, Alaba International will receive us tomorrow. 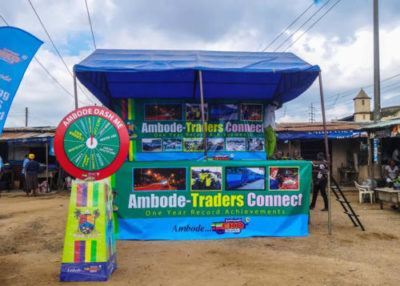 A key attraction is the “Ambode Dash Me Roll and Win” which is the source of dstributing the beow the line materials such as beach umbrella, raincoat, purse, face cap, reflective jacket, T-shirt, bag all bearing various messages of the achievements of Gov Ambode on security, decongestion, 114 roads project, Light Up Lagos, employment of teachers, engineers, fire service men and the renovation of schools and health centres.
Of course there were moments of frank talk. At Oke-Odo, they demanded more security to check pickpockets lurking around the pedestrian bridge at dusk and dawn; the Sura market women demanded lower interest rate for the loans to be provided by the Lagos State Employment Trust Fund. Sabo market women demanded cheaper stalls etc. The governor will get their demands in our report.
It was also exciting to get calls from many non-governmental bodies working in the market such as the UK -DFID Programme, GEMS, the Traders Rights Protection Initiative and activists such as Mrs. Joy Chinwoku who saw the idea as a responsible effot to get feedback and joined us on the trips.
Many thanks to the Iyaloas, Babalojas, market masters and the entire market community who made our engagement so much fun.
My most exciting discovery is that no one dances as dexteriously as our market women. Women in their 50s and 60s dig it to the ground once the dancing begins. Everybody has been having fun while soaking the message.