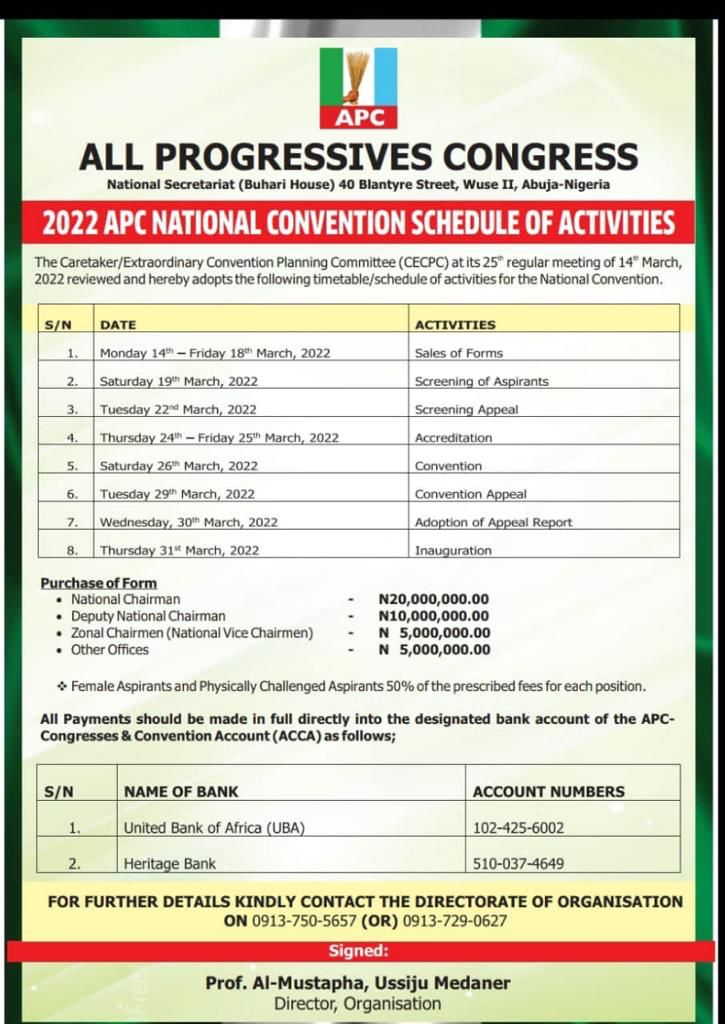 The All Progressives Congress (APC) has released time table for its forthcoming convention.

Governor Mai Mala Buni of Yobe State and the Caretaker/Extraordinary Convention Planning Committee (CECPC) of the All Progressives Congress (APC) has disclosed that the party will hold its convention on March 26, this month.

This is contained in a press release by Sen. John James Akpanudoedehe, National Secretary of the party who said, “This is to clarify the events of last week and reassure the membership and stakeholders of the Party, as well as the Nigerian people in general, that the Governing Party is crisis-free, strong and remains united in giving the country the transformative leadership and good governance which she promised them.

“That the CECPC was appointed, and has always done her best, to steer the affairs of the APC in line with the mandate invested in her at inauguration by the National Executive Council (NEC) of the All Progressives Congress.”

According to him, on the 28th day of February, 2022 the CECPC Chairman took a long-delayed trip abroad on health grounds, leaving behind written authorisation for other members of the CECPC to continue work in his absence, particularly the day to day management of the APC.

He said that in his absence, sundry activities earlier scheduled for action appeared to develop fresh urgency in order to satisfy the Timetable for the 2023 General Elections released by the Independent National Electoral Commission (INEC), thus galvanizing some within the CECPC to act in their best understanding of both the situation and the leadership dynamics in the Committee/Party.

The Secretary said that all such actions were clearly identified at all times as happening in an acting or proxy capacity, and under the auspices of the substantive Chairman, His Excellency, Governor Mai Mala Buni, contrary to widespread speculations that the Chairman, Secretary or some other officials of the CECPC have been removed from Office or otherwise replaced.

Akpanudoedehe said that the CECPC was intact and functional as originally constituted.

He said that delivering a seamlessly successful National Convention for the APC on March 26, 2022 is top on priority for the CECPC and we shall continue to execute such assignments as are legal pending the return of the Chairman who is on his way back to the country and shall resume Office on arrival with the full support of all members and other stakeholders. The CECPC are grateful to INEC for her firm guidance in the entire circumstances.

Meanwhile, the party has engaged a team of senior lawyers to address a purported court order halting the planned APC National Convention.

“We hereby call on the Judiciary to give the matter the needed and expedient attention in our bid to vacate the purported Court order and allow for the conduct of a transparent and rancour-free National Convention deserving of our great party, APC,” the scribe added.

He stressed that the Caretaker/Extraordinary Convention Planning Committee (CECPC) hereby restates absolute loyalty to the APC, thanks the National Organs and leadership of our Party led by His Excellency, President Muhammadu Buhari, GCFR and reassures our members and citizens that the Party is stronger than ever before and poised to extend her winning streak since 2015 into 2023 and beyond.