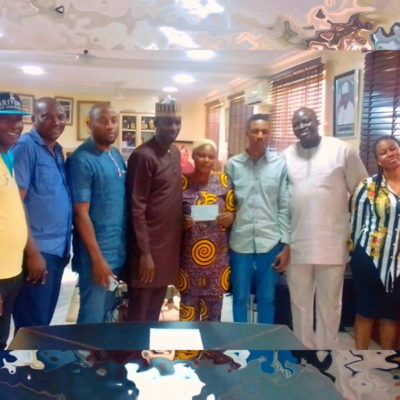 We would recall that some months ago, the legislature the councillor representing Ogun oloko ward ,Late Hon Olumuyiwa Olusegun a.k.a Masote after a brief illness.

During the burial programme, organised in honour of the late councillor at the Local Government secretariat, the Executive Chairman Hon Idris Bolaji Muse Ariyoh promised that his government would stand by the deceased family and announced automatic employment for the son and promised to empower the deceased wife in business of her choice and other areas to make the family comfortable. Those promises were fulfilled today in the presence of community leaders and political helmsmen.

The widow, Mrs. Olusegun appreciated the Executive Chairman for fulfilling his promises to the family.
She said:” Sir your kind gesture to the family left behind by the deceased showed the Humanitarian and kind hearted in you as this would go a long way to resuscitate the dying hope of the family”
She however promised to use the resources committed to the family judiciously. 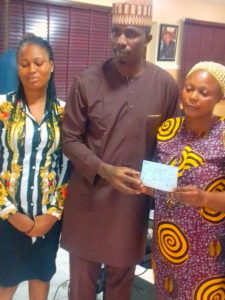 The Leader of the house ,Hon Rasheed Obasa on behalf of the Legislative arm of the Local Government appreciated the Executive Chairman for coming to the aid of the family of their late colleague and fulfilling the promises made earlier to the family, he promised the entire legislature would continue to support the deceased family.
He emphasised that this is a clear assurance that Hon Idris Bolaji Muse Ariyoh is a man of his words and would fulfill his election promises to the electorate. He also used the medium to appreciate the harmonious relationship that has been existing between the legislative and the executive, the good work which the administration has been doing since assumption of office and gave his word that more projects would be unveiled soon.

According to the. Media office,Hon Animashun saheed,the party LGA vice Chairman on behalf of the All progressives Congress , thanked the Executive Chairman for another demonstration of human- oriented leadership quality and in same vein admonished the deceased family to be closer to God and look unto HIM to see them through in life .
Present at the event were the Secretary to the Local Government, Hon Saheed Biola Oladipupo , former Executive Secretary, Hon Daud Olajobi, Hon Saheed Animasaun , Hon Yussuf Adesanya and civil servants.