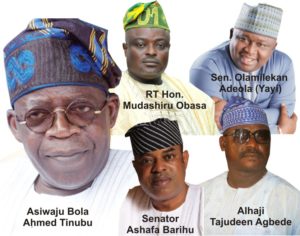 By 4pm, there was no band, no stage, no music. Alausa, the seat of government in Lagos State was unusually quiet.Workers went about their duties unpertubed by the news on every lip that it was the 45th birthday of His Excellency, Mr. Akinwumi Ambode.
This was the style chosen by the birthday boy, the quiet, self-effacing and shy governor of Lagos State.
Hints that Gov.Ambode was determined to avoid any noise came early that morning when the members of the State Executive Council arrived the chambers.
They were told that there would be no meeting because the governor had to make an urgent trip outside the state.
As usual, corporate bodies and fans of the governor were already coming in with various kinds of cake and cards.
It was left to his numerous fans to take their expression of support to the media.
And not unexpected the most prominent person to appreciate the governor on his birthday is his mentor, the National Leader of the All Progressives Congress and former Governor, Asiwaju Bola Ahmed Tinubu.
In a paid advertorial in The Nation and The Punch, the astute politician, popularly known as the Jagaban Borgu went down memory lane:
“When you ran for governor, those of us who supported you were greeted with all manner of abuse. These detractors did not know you and could not see the unique qualities you possessed.Those who knew you were sure you could do well and would do good for the state.
As governor, you have proven Your supporters right and your detractors wrong.You have shown the traits of a true leader who cares about the welfare of the people.”
In a robust endorsement of Ambode, Tinubu praised his “exceptional performance” commending him as “a pragmatic and excellent manager of men and resources”.
Thanking the governor for making him proud, Asiwaju Tinubu noted: ” I say thank you for being an exemplary and humble public servant who cares for each and every Lagosian no matter who they are. I am.proud to call you my governor”.
He prayed that God continues to guide Gov Ambode:s steps and prosper all that he does for the benefit of the people.
Asiwaju’s exemplary message was emulated by other men of goodwill including the senator representing Lagos West district, Solomon Adeola, better known as Yayi.
His words: “You are setting example for others to show that good governance in the service of the people is very possible even in the challenging environment of Lagos mega city.”
Members of the Federal House of Representatives representing Lagos State on the platform of the APC also extolled the virtues of Gov.Ambode on his birthday.
In a full page colourful advertorial in The Nation, the 17 lawmakers said: ” in the last few years, you have shown your good leadership qualities and the love for people of our dear state.”
Senator Gbenga Ashafa, representing Lagos East stated’ ” I want you to know we are proud of you and also thankful to you for running a government of inclusion and mMaking sure that all communities across the three senatorial districts currently have amazing dividends of good governance to cheer about in just two years of your administration.”
The House of Assembly, led by Honourable Speaker Mudasiru Obasa praised the governor for the high level of accomplishments.
“Your level of accomplishments and promises of future delivery to Lagos remain the yardsticks of performance in governance.
The unions also saluted the governor on his birthday.
The chairman, National Union of Road Transport Workers, NURTW, Lagos State Council, Alhaji Tajudeen Agbede praised the governor for the ” astonishing pace and quantum of transformation” that he has brought to Lagos.
Noting that it could only have come “through exceptional application of prudence, personal discipline, uncompromising regard and attention to the supreme welfare of the people”, he prayed that God give the governor good health.