The delay in the take-off of the Fire Service centre, Ejigbo was the talk of the town following the damage to properties suffered by tenants of No.29, Taiwo Street, Ejigbo which went up in flames recently.

The residents were thrown into a distress mood as one of the buildings in the area was caught in inferno.

It was gathered that the building at 29 Taiwo Street, a three story building had its walls terribly 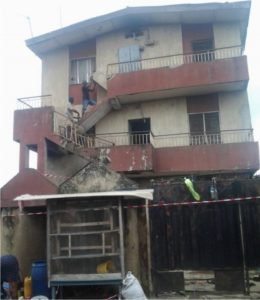 damaged before firefighters showed up at the scene. The walls became so weak due to the fire outbreak lasting for several hours before firefighters intervened. The residents tried to put off the fire but their attempts proved futile before it was put off by workers of the Lagos State Fire Service.

Though there was no official cause of the fire,it was gathered that one of the children of the residents of the building put on a cooking gas improperly and the whole kitchen went into flames. Another reaction raised was that it was an Air Conditioner that exploded and caught fire which spread to the roof of the house.

Echonews learnt that the state government has therefore sealed the house and ordered other tenants to vacate immediately in order to forestall further damage.

When our reporter visited the scene, the tenants were seen moving their properties from the house lamenting the damage caused by the fire.

Some of the victims refused to talk but one  said she had lost money, vital documents and house properties worth millions of naira.

Others who spoke with Echonews narrated that it took a while before the Lagos State Fire Service showed up at the scene which caused many properties to be damaged. Some others lamented that the story would have been different had the fire station at the Local Government Secretariat at Iyana-Ejigbo started operating.

The police patrol team led by the Divisional Police Officer DPO, simply identified as Gwazah was seen with the men inspecting the house.