Former aspirant to the Ejigbo LCDA Chairmanship, Mr.Peter Ajayi through his Campaign Organisation (PACO) has congratulated the All Progressives Congress (APC) Chairmanship candidate in Ejigbo LCDA, Hon. Monsuru Oloyede Bello who emerged winner of the 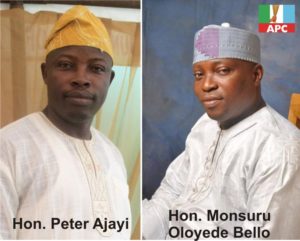 Chairmanship elections and the flag bearer of the party in the forthcoming local government scheduled for July 22.
Ajayi in a statement issued via the group stated that the selection of Obe as the candidate among other aspirants should be seen as best decision by the party leadership.

In addition, he further emphasized that it is normal in a competitive politics that out of many who are eyeing a particular post in an election, one would definitely emerge, disclosing that it is appropriate for all other aspirants to work as a team alongside selected candidate to win at the general elections.

The statement goes thus –
” I Congratulate Hon. Monster Bello Oloyede popularity known as OBE to have scaled through the tough contest as the flag bearer of our great party in Ejigbo LCDA come July 22. It is understandable that in party politics it is only one aspirant that emerges out of many and so it is expected by virtue of loyalty to party philosophy and the spirit of sportsmanship which we preach in our party, that other aspirants rally round who emerges as party flag bearer to win at the General polls.

“I implore other aspirants to extend the hands of fellowship and spirit of sportsmanship to the candidate so as to ensure victory in the coming election. The party is bigger than all interests.”

The group, however, urged the party candidate to see his emergence as victory for all interests in the council and an avenue to development the Local government area which would in turn yield benefits for the residents of Ejigbo community.