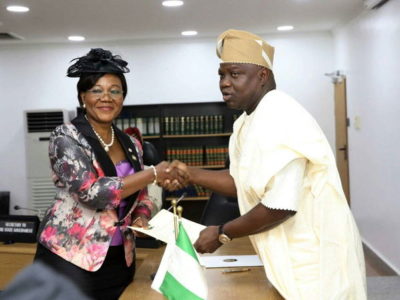 Lagos State Governor, Mr Akinwunmi Ambode on Tuesday swore-in Mrs. Folasade Adesoye as the 20th Head of Service of the State, with a charge on her to hit the ground running and work assiduously to bring out the best in all the civil servants in the State for the overall benefit of the people.

Speaking at the swearing-in ceremony held at the Executive Council Chambers in Alausa, Ikeja, Governor Ambode said concerted efforts have been made to place the State civil service on a sound footing for proactive, innovative, selfless and technology-driven service delivery, and that the onus is on the appointee to use her office to galvanize civil servants to build on the gains already recorded.

“The success of your tenure will be assessed not by the efforts you are able to put in but the tangible outcome in terms of improvements in the outlook and deliverables of the entire workforce. You are inheriting a public service that has, to a large extent, keyed into the vision and uncompromising principles of good governance of this administration. As one who is fully aware of our vision and policies, some of which you have helped to translate and implement, I expect that you will hit the ground running and make your mark.”

Governor Ambode, who expressed confidence in the ability of the appointee to add value to the public service and governance in general, said the appointment was another confirmation of the dynamic quality of both the service and civil servants in the State, as the minimum standard now acceptable is selfless service to the State and the people.

He said it had now become a tradition to continually appoint experienced, dedicated and tested professionals to key positions in government, adding that Adesoye’s appointment was in recognition and reward for competence, commitment, perseverance and hard work, and charged her to keep up the good works.

While specifically tasking Adesoye on responsibility to civil servants, Governor Ambode said: “As the Head of Service, all eyes are on you to provide leadership and direction to the over 100,000 civil/public servants in the State. You hold a strategic position to bring out the best in everyone from the Body of Permanent Secretaries down the ladder to the junior staff.”

Besides, the Governor commended the immediate past Head of Service, Mrs Olabowale Ademola for her contributions to the development of the State as well as the strengthening of the public service.

Responding, Adesoye thanked Governor Ambode for the opportunity given to her to serve, just as she assured that the public service, under her watch, would redouble efforts in ensuring speedy, efficient and effective implementation of government policies and initiatives.

Adesoye, who is a fellow of the Institute of Chartered Accountants of Nigeria (ICAN), particularly pledged total commitment to the duties and responsibilities of the new office, assuring that she would do everything within her capacity to justify the confidence reposed in her.

She said public servants in the State were already encouraged, motivated and energized by the demonstrated commitment of Governor Ambode to high quality public service delivery, prioritization of staff welfare, practical example of inclusive governance model, unprecedented state-wide infrastructural renewal and the strategic restructuring and realignment of the public service to ensure that it is fit and equipped to meet the challenges of the future, and pledged that efforts would be made to build on the successes achieved.