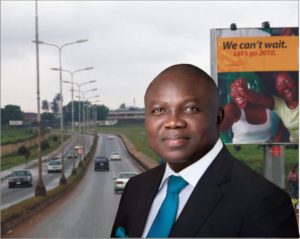 A stakeholders forum billed to hold very soon will flag off the plans of Lagos State Governor Akinwunmi Ambode to expand the 4-lane Airport Road to a 10-lane international masterpiece.
Set to be another wonder in the series of iconic projects that the governor has embarked on since he mounted the saddle two years ago, the project will define the stretch between Oshodi and the Murtala Muhammed International Airport as top priority highway dedicated to outbound and in-bound travellers.
Echonews learnt that the expansion to 10 lane may affect only properties which defied the physical planning laws of Lagos State by not respecting the right of way.
According to sources, the construction will start from a portion just after descending the flyover bridge also known as Oshodi Oke and terminate at the MMIA.
There were indications that the 10- lane road coming from the MMIA may be forced to merge to six just after Osolo way.
To.protect the road and save the lives of travelers, there are suggestions that the highway may be fenced off and interruptions from motorists from.secondary routes reduced to the barest minimum.
To achieve a similar objective, designers are proposing a bridge to fly over the U-Turn.near the toll gate so that motorists going to and coming from the airport will not need to stop as is currently case.
If accepted, the flyover would end the history of fatal accidents at this junction due to lack of communication between motorists heading towards the airport and those coming in from the toll gate.
This was what happened over a decade ago when a journalist working with The Guardian Newspapers, Mr. Joseph Sesebo tried to make the U-turn unaware that a vehicle heading to the MMIA on top speed had not given him the right of way. He died at the spot.
But residents don’t have to be in a hurry as Echonews confirmed from impeccable sources that the project will take not less than 18 months to complete.
Since inception, Governor Ambode has been advocating the takeover of MMIA route by the Lagos State Government to give it the treatment it deserves as the nation’s most prestigious gateway.
Earlier this year, the governor wrote to President Muhammadu Buhari seeking the handover of the route to enable Lagos State improve the infrastructures.
Despite a tacit nod by the president, the correspondence formally expressing the presidential approval had not been done by April prompting the governor to raise alarm that the good intention of his administration was been frustrated.
However, Echonews has, on good authority, confirmed that the Acting.President, Professor Yemi Osinbajo has directed the Minister of Works, Power and Housing, Mr.Babatunde Raji Fashola to issue the letter.
Mr. Fashola was governor of Lagos State from 2007 to 2015.
The news of the project has injected fresh fervour into the construction industry as companies began jostling for the honey pot.
Hitech, a construction country with excellent track record of delivering projects, ,Craneburg, currently working on Epe township roads and Julius Berger are among firms believed by industry sources to be well placed to pick the job.
The impending project may have raised the heart beat of hoteliers whose businesses dominate the corridor.
Many of them invested in the corridor to move closer to travelers and tourists coming into the country or on their way out.
Also concerned are banks and financial institutions who rely on the airport operations to make money.